The Hard Truth About Scalability: What To Know Before Scaling Up

Brace yourself, because I’m about to tell you the hard truth about scalability.

We’ll start by getting real about scaling in business:

So, what’s the secret sauce? How do you scale a team successfully, and why is it so hard?

If you have been in the software development business long enough, you’ve most likely experienced this nightmare:

In this article, I’ll explain what you need to do, in order to avoid that nightmare situation again (or, if you have been lucky enough not to experience it, to avoid it altogether).

My insight in this article comes from scaling software development teams, but you can apply the fundamental theory to scaling a business or growing a team in any industry. You will find this useful even if you’re adopting one of the out-of-the-box scaling frameworks—Large Scale Scrum (LeSS), Scrum@Scale, SAFe.

This is because I focus on several important aspects of scalability that are never mentioned in those methodologies—the fundamental truth about the nature of scaling up that often gets forgotten or ignored.

In the following sections, I’ll introduce:

The Fundamental Law of Scaling

The Fundamental Law Of Scaling is an empirical observation of what happens in projects when they scale up:

Scaling up amplifies the bad and makes the good more difficult.

Let’s see what the Law means in practice with some scalability examples.

On the other hand, if communication channels are good to start with, scaling up will introduce some challenges due not only to the increased number of people, but also due to their distribution. Often new teams are created in different locations, forcing changes in communication channels—for example, going from face-to-face meetings to video conferencing or by replacing a whiteboard with an electronic tool.

We also see the Fundamental Law of Scaling in Continuous Integration (CI) and continuous delivery (CD) pipelines. When there is only one team, things are quite straightforward.

Moving from one to two teams, the CI and CD systems become more complicated—usually, when there are n teams, the number of CI pipelines tends to be n+1 (one pipeline per team, plus one for integration). This has obvious repercussions on provisioning of environments, and on the coordination among teams.

These are just three examples of some of the challenges introduced by scaling up. I’m sure you will be able to come up with many more.

Let’s assume you are willing to accept the tradeoffs involved. The next thing you need is for your project to satisfy some important prerequisites to prove out your scalability.

Whether or not you’ve got a scalable business, project, or team depends on several prerequisites listed below. If you fulfill these prerequisites, then you have high scalability. On the flipside, if any of them is not satisfied, the chances of failure increase dramatically.

1. The Presence Of Clear, Shared Goals

This should be a given, but in my experience, the absence of clear, shared, goals is extremely common. Without these, the teams will pull in different directions, making it more difficult to deliver something useful.

2. The Use Of Appropriate Metrics

The bigger the project the more important it is to be able to measure the impact of the decisions taken. For instance, did the addition of a new team improve the ability of the project to deliver? Are we pushing the teams so hard that quality is dropping? Are teams working well together, or are they interfering with each other?

If the “shape” of the system doesn’t match the teams structure, adding more teams will only make things worse. This is a direct effect of Conway’s Law, a well known empirical observation that has been proven in practice.

4. Availability Of Managerial And Technical Skills

Issues due to lack of skills will have an amplified negative effect as the project scales up.

This goes hand-in-hand with prioritisation and planning. Also, the effect of wrong, misunderstood, or unnecessary requirements will be amplified as the number of teams grows.

The bigger the project, the bigger the negative effect of bad quality. In some pathological (and common) scenarios, some bugs may become features, as the feedback loops to fix them can be so long that other teams may have designed their workarounds to neutralise them.

Any manual activity is a bottleneck whose effects become worse with the number of people and teams. A (very common) case in point: manual testing activities to ensure no regressions have been introduced before a production release. In my experience that is one of the biggest bottlenecks in any projects, but especially in projects with more than one team.

Watch Out For Premature Scaling

Scalability is at the top of mind for startups and serial entrepreneurs—and they’ve got a lesson or two to teach us about scaling prematurely.

If you undertake a scaling effort before you’ve really met the prerequisites for successfully scaling a business, team, or organization, you get what the startup community calls “premature scaling”.

“Premature scaling: growing in anticipation of demand instead of demand driven growth.”

Indeed, scaling properly takes time—and true scalability is driven by a real need for scale due to demand, not by artificially imposed notion of simply getting bigger and doing more things faster.

The startup community offers a couple of lessons we can take back to our teams and projects when when think about whether or not it’s time to scale. Here are a few stats from the Startup Genome Report Extra on Premature Scaling:

Are You Really Ready to Scale?

If your project is well run, and satisfies the prerequisites above, your next question should be:

“How many teams can contribute productively?”

We will answer this one in the next section.

What’s The Limit Of Scalability? Brooks’ And Amdhal’s Laws

It is a well known fact that adding more people to a software project is not necessarily going to increase productivity.

Actually, in most cases, adding more people will cause a severe productivity drop.

Fred Brooks made this observation in his Mythical Man Month book, which became known as Brooks’s Law:

The latter half of the quote above is, in my opinion, the most interesting. In fact, it’s basically the plain language version of Amdhal’s Law—a formula that gives the maximum theoretical speed-up of a concurrent system:

n = number of processors (teams, in our case)

In fact, a project with multiple teams is a kind of concurrent system where each team is a processing unit. In practice, Amdhal’s Law states that the maximum amount of concurrent work is limited by the amount of serial work that needs to be done.

In plain words, this means that the things that needs to be done in a particular order will place restrictions on the amount of stuff that teams can work on all at the same time.

What Is Serial Work In A Software Development Context?

You may be wondering what kind of work is serial work that affects software teams.

Here are a few examples (I’m sure you can come up with many more):

The graph below displays the implications of Amdhal’s Law when scaling up the number of teams on productivity.

We can see that productivity will scale up in sub-linear fashion with the increase in the number of teams—until a peak, after which it will decrease again. An illustration of Amdahl’s law: Deliverables throughput increases with the number of teams, but only until a certain point—and it’s not usually what managers hope.

If you only remember one thing from this article, this is the one:

Increasing your number of teams can increase throughput—but only until a certain point.

So, What’s The Ideal Number Of Teams For A Given Project?

Unfortunately, there are no equations to calculate the ideal number of teams for a given project in advance. The only way is to use a set of project metrics to measure things like productivity and quality, and to see what happens when teams are added or removed. My recommendation is to start small with one team of 3-6 people, and scale up only when and if necessary.

At some point, you may find out that you’ve already reached the peak number of teams, but your project will still be unable to meet its commitments. That’s where your prioritisation and communication skills come in handy, as you may have to have some tough conversations with your customers.

When adding a new team to the project, how are they supposed to work? To start, ask yourself these two questions:

If you said yes to #1, the team will be a feature team.

If you said yes to #2, it will be a component team.

Choosing the appropriate team structure and team organization is very important, but it is not easy. Currently, feature teams seem to be the preferred option in most situations. However, that choice is often based on habit or routine instead of data.

The reality is that “it depends”. More specifically, it depends on the architecture of the system. Software projects tend to follow what is known as Conway’s Law—an empirical observation by Mel Conway:

This is the reason why I always recommend managers to involve senior architects and technical leads in teams structure decisions—otherwise, managers are really doing system design without realising it (and without the appropriate skills). That, in turn, can greatly increase the risk of project failure.

In my experience as a consultant with a number of large scale projects, I’ve come to the conclusion that, in most cases, projects scale for the wrong reasons.

I’ve invented two paradoxes that sum up what I’ve seen in practice: 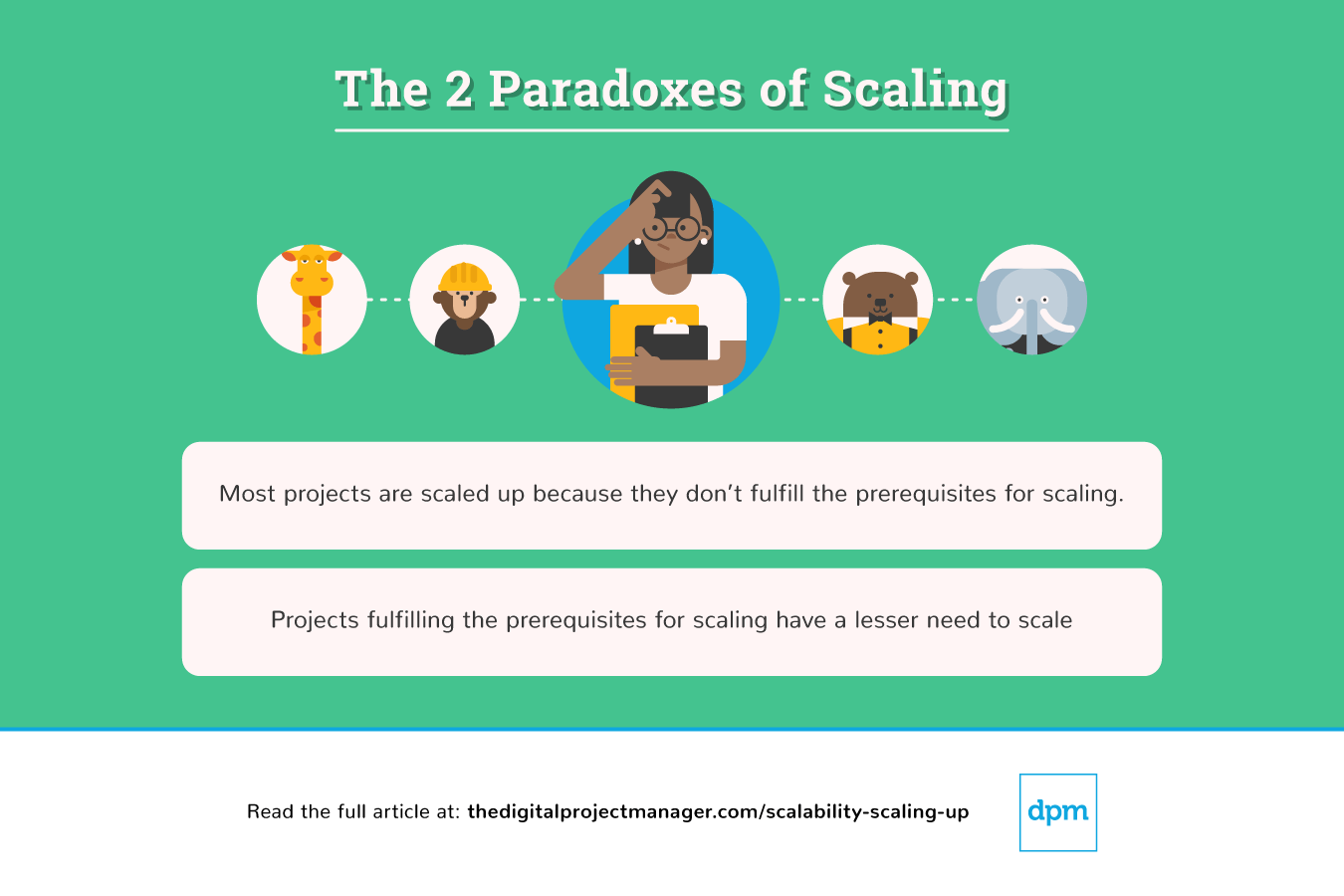 The first paradox says that, in most situations, projects are proceeding slowly simply because they are not well managed.

The second one says that well-managed projects will have a lesser need for scale simply because they are well managed.

If you are involved in a project that is experiencing issues and delays, the best recommendation I can give is to scale down the mess, before considering scaling up the project.

Takeaways To Scale Your Teams The Right Way

Scaling software teams is not easy, and needs to be done with extreme care. Before you go, some final thoughts on finding the most effective way to scale a software development team:

Here are the first steps I suggest you take after reading this article:

And as always, please comment, share, and get involved with the conversation—what do you think leaders and managers should know before scaling up?

I am an experienced Software Architect, Programmer, Coach, and Consultant with experience in many domains, including, among others, investment banking, telecommunications, oil and gas exploration and travel security. I have experience in providing consulting and advice to projects of all sizes: from small ones carried out by small co-located teams up to projects involving hundreds of developers split in geographically distributed teams.

What Is Bridge24? Overview Of The Reporting And Exporting Tool For Project Management

What Is Bridge24? Overview Of The Reporting And Exporting Tool For Project Management How To Leverage People Data To Run High-Performance Project Teams

How To Adapt Agile And Kanban For Remote Teams Most Googled Methodologies: The Surge In Agile During COVID